We will never forget the roller coaster ride when we were told the adoption was only a few weeks out, only to have it pushed out another year and a half. Last week when my brother asked me if I'd want to go through all those uncertainties again, my mind went so many directions. No, I'd certainly not choose it, neither would I choose it any other way. You know, we'd never be strengthened in life if God would just send us all sailing down gentle slopes of ease!

Hosanna, five, and Jesse, four, never tire of listening to the story of how they first came to our home through the foster system when Jesse was only a teeny baby. Then there are the intense parts when we didn't know where their permanent home would be, and the joy of the birth parents asking if we'd be willing to adopt them as a forever part of the family. Never before has my heart leaped with such intense happiness mingled with such agonizing sympathy for the dear mother who gave birth to 'my' children.

So much has transpired since that one and only moment.

Now a year after adoption, we were ready to celebrate.

Our ideas of tent camping or going to the park on the day marking a year fell flat when the forecast predicted a chilly overcast day.

We opted for plan B. Early in the morning, I wrote little notes, such as, "Make cupcakes and share some, Play Bubbles and count by tens, or Mark the wall with measurements for each child."

When the seven notes were written, I folded them and slid them into pink, blue, and gray balloons we had saved from the adoption party a year ago. Thanks to my early riser, Austin, for blowing up the balloons for me. After I knotted them, we tied them onto the gaslight above the kitchen table.

Soon blinking eyes were rounding the corner into the kitchen, wondering what the balloons are all about. At the breakfast table I told them how they'll each get a turn to pop one balloon, then we'll do what it says on the paper. It didn't take inquisitive Julia long to hold the balloons up to the light in an attempt to read the slips of paper. I laughingly told them that they can go right ahead if they could figure it out.

As soon as the morning chores were completed, six children gathered around the balloons. There were happy shrieks as the first balloon popped when Elijah pinched his in the doorway.

Little Joshua was as proud as could be when his turn rolled around. He followed his brother's example of using the door to pop his. Surely it was better than wonderful to see the children play together, knowing that God used adoption to seal us as a forever family. (How much more does God also delight in calling us his own children, and giving us all we need?!)

Julia's girlish nature wasn't convinced about popping a balloon, creating such a noisy pop. Using a pin, she braved it, then read her note to all of us, "Everyone goes to the shop to give Daddy a hug," A quick scramble followed, and off we went. We took the one remaining balloon with us to the shop, where we asked Uncle Micah to pop it for us. Picking up a long board, he gave it a big whack. Shrieking with delight the children sprinted for the paper and followed the suggestion of playing "Frogs in the Pond."

Soon it was time for lunch. Austin, my little chef in the making, chose to make stacks for lunch. (Yes, he asked if he could be the one in charge to daily make lunch for the family, of which I did not argue with, for even a second.) I keep telling him that his eagerness to learn is what will take him a long way in learning quickly.

So, while we wait for a perfect sunny day to celebrate a year since the adoption, join seven-year-old Austin as he makes hot dog and noodle casserole. He will be using homemade hot dogs for his, though store- boughten will work fine, too.

We have enjoyed this Hot Dog and Noodle Casserole meal. Hot Dog and Noodle Casserole is fully of flavor and at a time when cuts of meat are expensive, you can go the cheap route and use hot dogs. But if you don't like hot dogs, veggie dogs would work just fine and if you don't like either of those, you could sub the dogs for chunks of ham or even beef. So there is some versatility in this recipe!

The magic happens in the sauce, which is a combination of salad dressing (a Miracle Whip type), brown sugar, and mustard. Here is the sauce being made.

1.   In a large kettle, cook noodles and drain. In a saucepan, melt butter and stir in flour.

4.  Remove from heat, add cheese and salt, stir until cheese is melted.

5.     Add this sauce and the cooked noodles into a baking dish. Add salt to taste.

6.   Mix topping ingredients together, then toss in hot dogs and stir.

7.   Layer hot dogs mixture on top of noodles or stir into noodles. 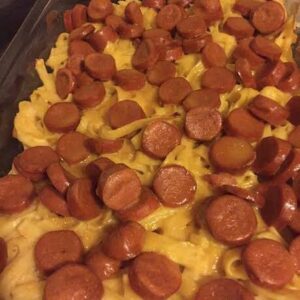 Tried this recipe?Let us know how it was!
« Amish Breakfast Cake
5 Amish Farmhouse Skillet Recipes »