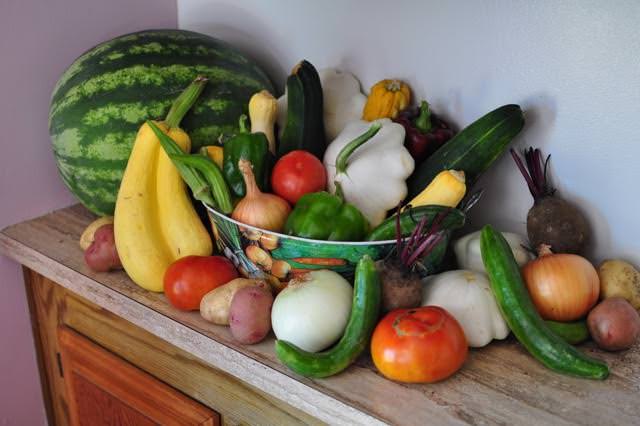 Fresh veggies like these from the garden are the foundation of Gloria's Garden Roll-Ups...

The air was thick enough to be sliced.  In a matter of minutes we’d find out whether our dream would become a reality. For weeks we had been waiting, praying, and discussing the option of buying a 30 acre piece of land. We idealized the location, it was only a mile from where we live now. In Amish communities such as ours, location is a huge issue since horses and bicycles just don’t go as far or fast as motorized vehicles.

So here we were, this beautiful piece of land that had both wooded areas and tillable acreage was about to be sold. After living in our little house trailer for six years we did feel ready to expand a bit. My husband Daniel stood beside me in his usual calm composure, as handsome as ever, wearing his new teal shirt and light brown straw hat.

Several days before Daniel and I had decided what our maximum bid would be. Now the time had come for it to be sold. As Daniel bid, the price kept climbing. Tension mounted within me: would it really keep going up and up out of our range? Daniel gave his final bid and my heart started sinking. Would it actually be topped? Time stood still as the auctioneer repeatedly begged for another bid. We had prayed about this situation and trusted God would work it out according to his forseeing plan.  Family members and friends had also attended the auction and their support was appreciated.

At last there was a 20 second countdown remaining before concluding sale. Then it happened. “Three…two…one..Sold!” announced the auctioneer. The crowd applauded.

“Can this really be true?”I wondered to myself. Friends congratulated us and asked us when we planned to move.  “Sometime in the next several years” we responded.

Interestingly enough, the “next several years” seem to be fast-forwarding at top speed!  We don’t have  a moving date but things are progressing very well. We purchased a  28 X 60 double wide in Indiana that will be transported here next week, Lord willing.  We plan to live in that. For those of you who might be thinking the double-wide is a temporary home until we one day build a big farmhouse, that is not the case.  This will be our home. We idealize not having too much of our lives tied up in our earthly possessions thus enabling us to share more freely with those in need.

Daniel has done lots of work clearing and bulldozing at the building site where the driveway will be. The children and I have had lots of fun trailing after Daniel, watching and helping where possible.  My parents faithful little pony, April, has made countless trips to our future home. In fact, she now knows which route to go to get there. It has also been an excellent time for 4-year-old Julia to practice driving the pony and learning new safety tips as well how to turn right or left or things such as keeping the reins snug but not pulled back too hard.

Julia’s highlight when going to our new property is going on picnics. Daniel’s motto “keep it simple”has helped me a lot in planning and preparing picnics. Sandwiches seem to be the most practical option. We like having fresh hamburgers loaded with garden goodies. Garden roll-ups and homemade cookies or bars are a few more of our favorite picnic foods. I do keep a tote filled with items such as plates, napkins, snacks and blankets that I keep at the project site which helps reduce the effort for an outdoor meal. Camping chairs, toys and Austin’s potty chair are several items we like to keep there.

Our time spent together as a family while working at the new property is a highlight for all of us and gives me a breath of fresh air after having been home all day.  Our new home will be close to the center of the Amish community which consists of 21 families. At the same time we’ll have all the privacy we could ask for which we are very thankful for.

Combine sour cream or cheese and ranch dressing mix. Mix in  remaining ingredients. Spread evenly over tortillas. Roll up and refrigerate 5 – 6 hours and slice 1 /2 inch thick. May be served with salsa.