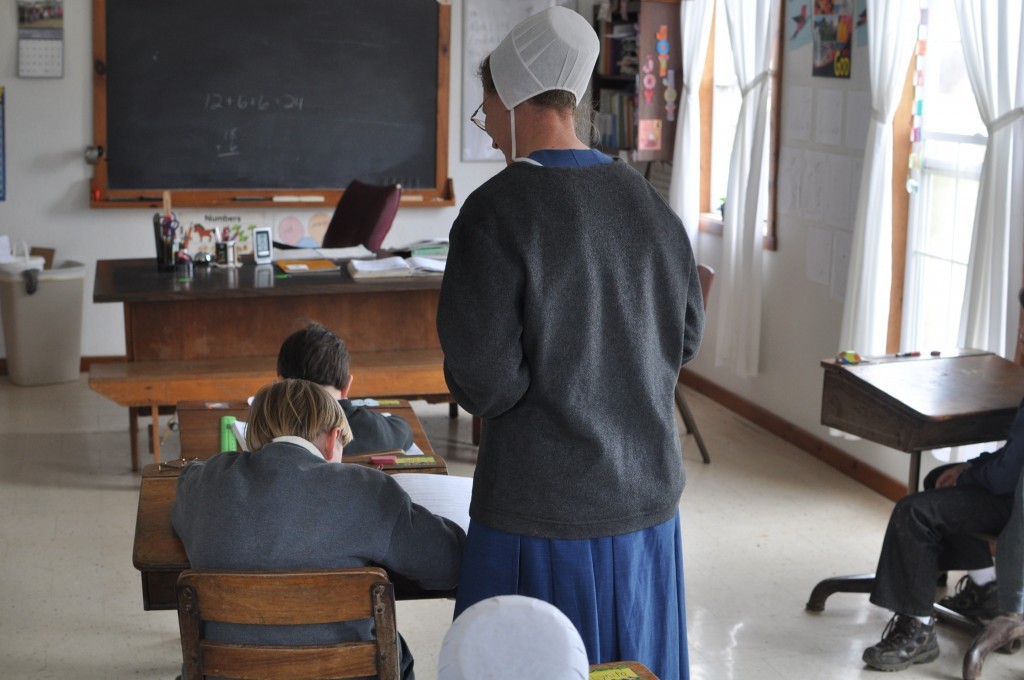 Inside the Amish school in Flat Rock, Illinois

Today, we as a church had an excellent time together at what we call our “annual school picnic.”

For the last five weeks the three teachers and 22 students in our little country school next door have been practicing for a program.  On the last day of school everyone in church is invited to be at the schoolhouse at 9:30 a.m. where the scholars present their 45 minute program.  The songs they sang and the poems they recited were  packed with reminders of the premises in the Bible about spending eternity with God in Heaven if we live faithfully for Him and have Jesus as our Lord and Savior.

Watching the children in grades one through eight and hearing their inspirations is a highlight for all of us. I especially enjoy listening to the first graders as their voices blend in sweet, childish harmony as they recite their poems.

This year we had three pupils graduating from the 8th grade including my sister, Anna Faith.  This has been their last year of going to school.  They will spend the next few years at home with their parents or having a job working for someone in our community learning many basic concepts of various trades and projects. I have many fond memories of my teen years spent with my family as Mom taught me more about cooking, baking, sewing, caring for children, and many other skills that have helped me in caring for my own children and household duties.

Lunch was served after the program. Mmmm, talking about some tasty food!  There were all kinds of options from mashed potatoes and meatballs to four kinds of salads along with cheesecakes, delights, and baked goods. My eyes feasted on the rhubarb cake dessert I spotted. It’s a favorite of mine that is made quite frequently in Danville, Ohio where my husband’s family lives.  I remarked about the rhubarb cake dessert being a treat when one of the other ladies commented that where she grew up near Bellefontaine, Ohio they would almost always have a rhubarb cake dessert at their school picnics each spring.   The rhubarb ripened each spring just in time for their program day.

After lunch was the part that the children and youth look forward to the most.  It was time to play softball! First the pupils from fifth through eighth grades played against their dads.  The pupils were joined by their teachers.  In the beginning the fathers took the lead but by the fourth inning the dads were getting tired and started losing out.  At age 40 and over it’s just not as easy to speed around the bases and chase after the ball like it was during their teen years.  In the end we clapped and cheered for the students as they  beat their fathers by several runs.

Next, the most fascinating game:  the children in first through fourth grades played against their mothers.  Now it’s one thing to watch the 50 year old men with white beards running around the bases but it’s another to watch the mothers, some of who are also grandmothers, batting a ball or chasing a high fly! I must say they do pretty well considering they only play once a year!

Our ball games are far from professional, it’s simply a time of enjoying one another’s company as we play together. This year my husband Daniel and I were asked to help coordinate some activities for the children who were from ages one through six.  One project we chose was “fishing.”    Daniel fetched a large box at the shop, the size they use to box up dressers when they ship them.   This huge box became a children’s “pond.”  We gave them sticks with strings attached. At the end of the string we fastened a clothespin to serve as a hook.  They would throw their hook into an open box to see what they could catch.   The children were too short to see the two little boys hiding inside the box clipping the pins to baggies filled with snacks and candy for them to “reel in.”  The fishing went well, there were enough baggies for the 20 children who participated.

How about I share the recipe for the rhubarb dessert served at the picnic?  Also, a hearty hello to readers of The Amish Cook who read this column in The Kokomo Tribune in Indiana!