These Triple Butter Biscuits have performed very well on Amish365, racking up impressive numbers despite not having any photos with them.   I wanted a few photos to go with this well-performing recipe so I enlisted reader Barbara to help:

First of all, this is what Barbara had to say about these biscuits:

I was excited to try this no-knead, no cutting out biscuit recipe.  However, I was a bit leary about how it would turn out.  I did use the 1 cup of whole wheat flour, and I did use a tablespoon of sugar.  This all came together nicely.  Do not have a fancy ice cream scoop that everyone uses for cookies or this recipe, just used a tablespoon.  Oh my goodness, this is amazing.  It was a cross between a biscuit and a light wheat bread.  The cooked biscuits are not overly designed as we all know them, however, if you do not mind grabbing several of these nuggets to eat, it will be a delight in your plate with whatever is on the menu.  Will be making sausage gravy in the morning to go over these.  And when Rosanna said to crowd the scoops of batter, she was not kidding.  Just excellent!!
Below are some photos from Barbara's biscuit adventure and then the original post and recipe from Rosanna about the biscuits. Enjoy! 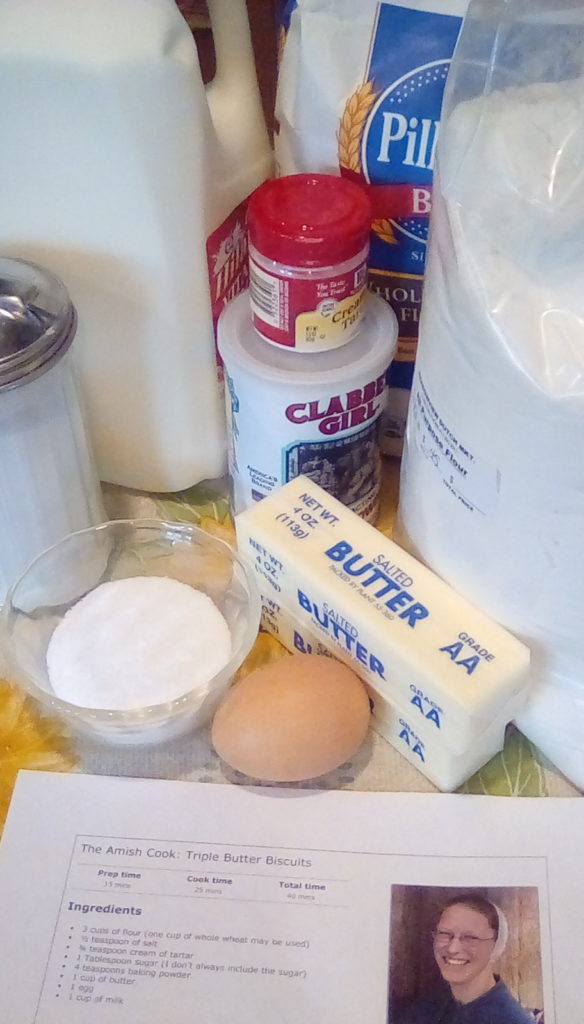 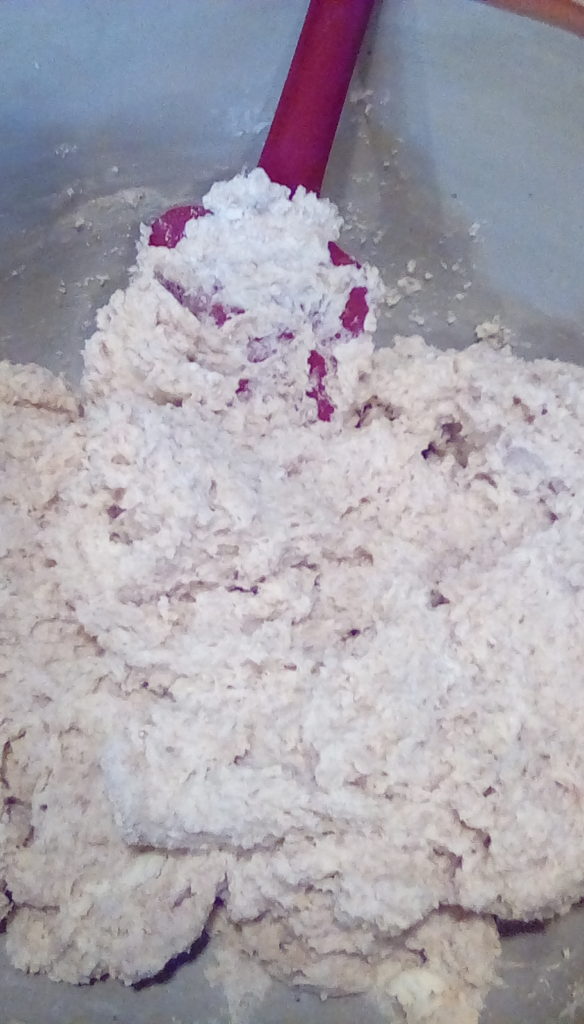 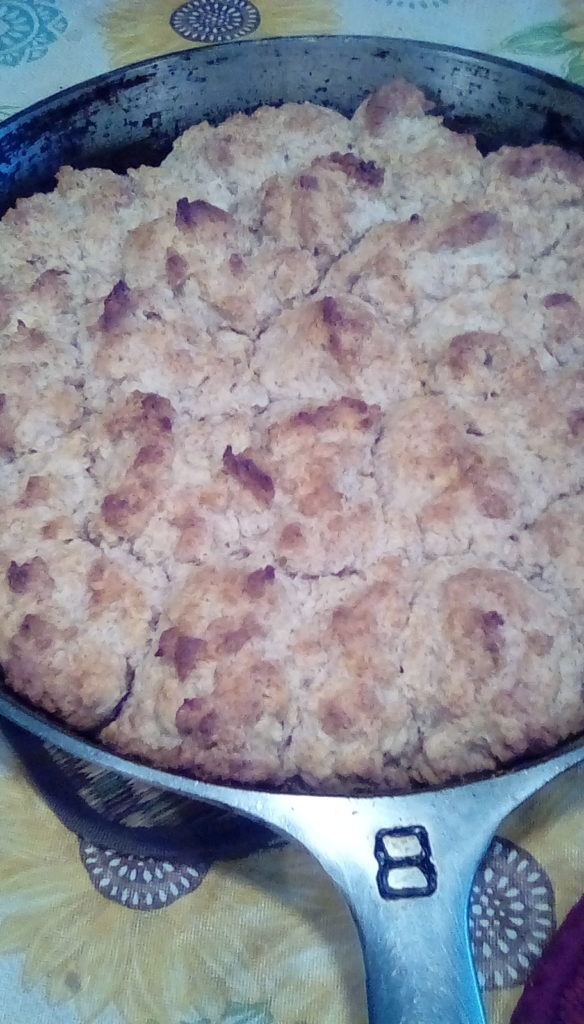 Biscuits in a skillet, those are my kind of biscuits! 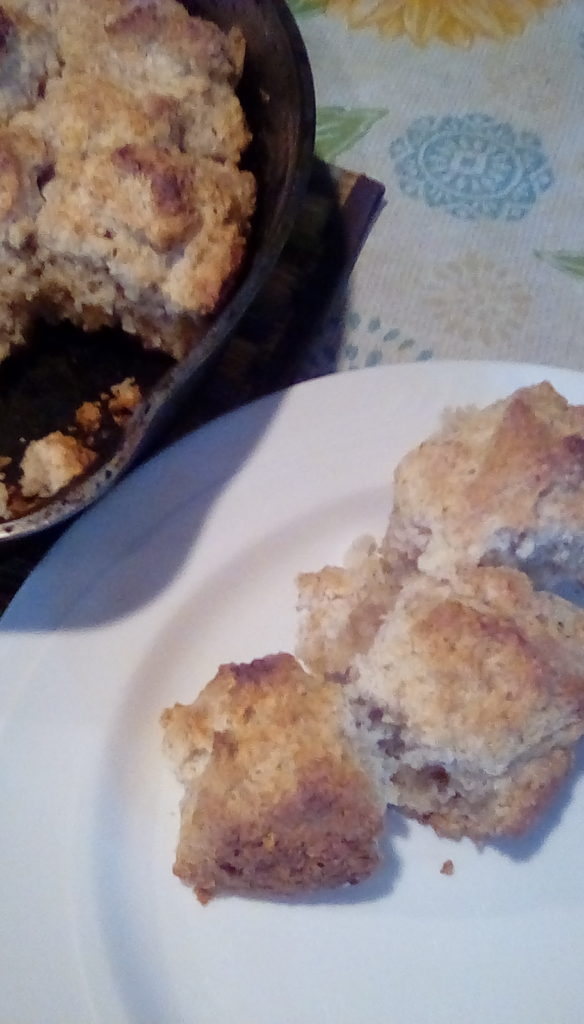 Perhaps my first introduction to good biscuits came at my friend’s house when I was in elementary school. I never knew that baking powder biscuits could rival yeast rolls. On more than one occasion I recall eating her mother’s amazing pan biscuits. I still have a memory picture of those biscuits gracing the center of the sun-lit oak table. Never had I seen biscuits baked in a square dish, their puffy tops resembling a golden quilt. When we pulled a steaming biscuit away from its close-knit family, the biscuit was both moist and crumbly. And then we placed a butter pat to melt between the halves… It was butter at its best. If this recitation isn’t making you reach for your mixing bowl, you have probably had your taste buds damaged by too many canned biscuits.

Sadly, my friend moved to the West Coast before I was mature enough to ask for the recipe. Therefore, I came up with my own quite satisfactory version by baking the biscuits in a pool of butter. Here in Kansas, we consider ourselves Midwesterners, not Southerners, so yeast rolls often trump biscuits for table space on Sunday or holiday dinners. But when we have visitors over and need to serve something special really fast, I check my butter supply, then whip up the Triple Butter Biscuits without a second thought. These biscuits never fail to impress. Folks who think they don’t like biscuits will sing a different tune after biting into one of these fluffy squares. Crispy, butter -browned edges perfectly complement the melting pools of butter you spread on the inside. Honey should only be applied after the first two biscuits have been slowly savored in all their buttered glory. I make no secret about my enthusiasm for good biscuits!  By the way, this is another good Amish365 biscuit recipe.