Those who have bid farewell to life on earth with your partner know the hundreds of little 'firsts' you bump into randomly throughout your days. It has been 4 ½ months since Daniel went to heaven, so I cannot speak out of the experience beyond that.

So many things I had never imagined were happening to me. Some are minor; some are stark, and others are flat-out grueling. I'll never forget that first magazine that came with Daniel's name on it, but they're no Daniel to read it. In my heart, I knew he had much better things. Yet, it still hurts every time I get rid of Busy Beaver magazines (an Amish/ Mennonite advertising paper) and haven't watched Daniel sit down and flip through it, remarking how people do all sorts of things to make money.

Daniel's birthday is coming up on Sunday. We will miss not making his apricot pie and watching him eat it with homemade vanilla ice cream. The last time I had made some for him, Julia asked why he was so quiet while eating it. Smiling, I told her, "He's enjoying it too much to talk." His grin proved my answer to be accurate.

With school starting, the men from our church go in three mornings a week to have devotions with the teachers and children. I loved going with Daniel as I soaked in the thrill of watching him teach these innocent little hearts more about Jesus. Now what? I have no answers. Yes, I can go with other couples to church, but nothing will ever compare to my Daniel. I know God will bring blessings more remarkable than heartache, though I can't wrap my aching brain around it right now.

Shopping was an entirely new dimension for me. The last time Daniel went shopping, he came home loaded with armloads of grocery bags. Besides the necessities I had jotted on a list for him, he had bought several cans of orange juice for me, an array of fruits, special snacks, and the list goes on. I blinked in amazement and received it as a gift of love for all of us.

Now, as I make a list to go shopping by myself, I jot only what I have to have; Daniel isn't here to be my breadwinner anymore. I know I shouldn't be too stingy, there's never an actual shortage of money but still my mind went on. I pray and tell God about it.

A few weeks ago, I headed to Walmart with the four youngest. Stepping in the entryway, we shuffled to the side to the special carts for shopping with children. Since Joshua was sleeping, he was kept in the car seat in the main section of the cart, Hosanna was tickled to sit in the front, and the two four-year-old boys sat side by side in the double seat. My mother heart overflowed.

We made our way up and down the aisles. As always, the children spied endless ideas of items to buy. Meanwhile, my mind kept going to several people for who I was inspired to buy gifts. God had lifted the heaviness from my heart regarding using money, so with a sense of relief, I picked out what I thought might be good gift items. The children were impressed to be along to buy things for others and added their opinions along the way.

An hour and a half later, we made our way to the checkout counter, where I met a non- Amish lady who comes to our fall widow's suppers. I stepped over to her and told her about my husband's passing. We had a friendly little chat and were both on our way. As the children helped me pile our items on the conveyor belt, I started wondering if I was wise even to come to Walmart in the first place. "If I hadn't come, I hadn't spent this money," I mulled, "but then I don't want to go down that path of reasoning things out again.

Soon after the final item was scanned, the cashier told me she needed to come to the other side. I shuffled my oversized cart to the side as she stepped over and swiped another card. "This is strange," I mused. Returning, she said, "That lady over there in the blue shirt just paid your bill."

I blinked. Could it be true? (I cry as I now think about it all again.)

It was the dear widow lady I had met minutes before. I thanked her from the bottom of my heart and asked God to bless her. I told the cashier lady, "This is a reminder to me of how God provides. I am learning how to do life as a widow with six little children." In my heart, I knew God wanted to prove how he cares for us if only we trusted!

The next time I make a shopping list I hope I will not fret for even a moment; I am not in charge of our lives, but One much greater than I!

These week, Gloria's recipe for Underground Ham Casserole made with Velveeta or as Gloria prefers her homemade version of Velveeta.

The Amish like to ham it up, that is for sure.  And one of the favorite ways to do so is with this "underground ham casserole" named so because the finely diced ham, well, you have to "dig" for it.  Ham is something enjoyed year-round in most Amish kitchens, but it seems to go especially well in winter.  And hog butchering days are usually in late winter, so the supply of fresh ham would be especially plentiful then.  Amish cooks will cure their ham in several different ways: salt, smoked, or sugared. Leftover ham is an easy protein source to throw into a cheesy casserole.

This ham casserole recipe is, for some reason, another one of those that is found in every single Amish cookbook.  It's a very popular recipe in Amish kitchens.  Recipe tester Karen gave it a try for us and photographed it and here is what she had to say about it:

This is a hearty stick-to-your-ribs dish that’s great for a chilly fall evening. It’s a little labor-intensive, but I used a package of prepared mashed potatoes (such as the Bob Evans brand) as a shortcut.  My suggestion is to decrease the mashed potatoes by half, as I did; four quarts, as written in the original recipe, is a lot of mashed potatoes!  If I make this again, I would also decrease the Velveeta cream sauce to one cup instead of two. Overall rating:  3 out of 5 stars

Thank you Karen for such a superb job giving that recipe a whirl! I do think Karen's suggestions are good, they seem to put proportions in better line.  Some Amish cooks have an almost religious attachment to Velveeta cheddar cheese, while others shun it.  Gloria Yoder, our Amish Cook, isn't a huge fan of it. She makes her own and you can get that recipe here.

Okay, and now Underground Ham Casserole in photos and then the recipe card!

Double Ham & Noodle Casserole - made with pasta or egg noodles a large bowl of this may pop a button!

Super Ham & Spaghetti Bake Casserole - There' something about oven baked spaghetti stirred up with . 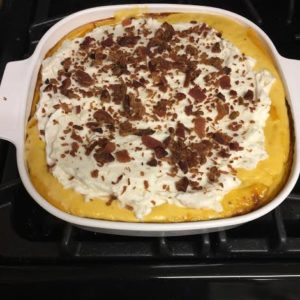