Bob Andy Pie was one of the first desserts I ever encountered when visiting the Amish for the first time  over 20 years ago.  It is admittedly one of the more unusually named pies.  How did it get its odd name?

Whichever version you ascribe to you, you'll love this pie will its cool, creamy, cinnamony goodness which is perfect on a warm summer weekend (like this one!)  I have seen some variations of the recipe that call for flaked coconut, but this version does not call for that.  And, you know, you can leave the cloves out. I often do.

You can use your own homemade pie crust or you can cheat and buy a frozen one at the supermarket. Either way, the pie will turn out super.

Cloves aren't my favorite and the pie does just fine without them.  Doesn't this pie look tasty?    This pie has more midwestern roots, you won't find it in Amish settlements in the east as much as you do in Indiana and Iowa. Some people compare it to the more common Hoosier sugar cream, while others compare it to a chess pie.  Either way, you'll say yum!

This recipe is also a classic example of inventive, creative, scratch-made culinary creativity. I mean, if you think about it, this recipe is just very basic: milk, sugar, cinnamon, flour, eggs, and, geez, I suppose there's another reason for the name of the pie...Bob Andy Pie just sounds more "interesting" than Sweet Milk Pie? 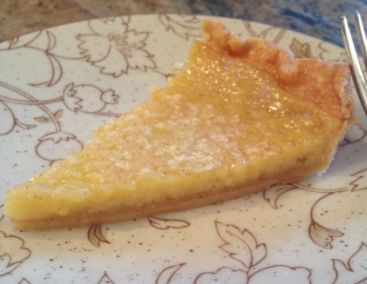 Tried this recipe?Let us know how it was!
« Amish Zucchini and Carrot Casserole
Amish Cook: Refreshing Summer Banana Slush »