Wow, oh wow…..Pie Week on Amish365.com continues with this amazing Heaven in a crust:  Vanilla Crumb Pie.  I tasted some Amish-made vanilla crumb pie recently and it was just indescribable…but I'll try anyway.  It has a crumbly crumb topping (I love crumb toppings) encasing a layer of gooey, brown sugary bliss.  This vanilla crumb pie recipe below is a gem that I got from an Amish woman in Virginia.

The formulations for vanilla crumb pie are all pretty much the same, so with the recipe below you can create your own pie bliss.

The Amish are known for their simple scratch-made pies like brown sugar pie, milk pie, bob any pie, etc, but this one may take the cake...er the pie...for best simple confections.

Reader Dee C. in Wooster, Ohio was kind enough to share a scene from her Thanksgiving table.  But, first, I'd be remiss without a word about Wooster.

Wooster is a unique place, the county seat of Wayne County, Ohio, on the edge of Amish Country.  I was a featured author at the Buckeye Book Fair held every November on the campus of Wooster College.  That was six years ago this month and the evening before the book fair brought a heavy band of lake effect snow, so that was kind of neat.  But not long before that a tornado had hit the Wooster campus, and you could see mangled structures from that. So it was a surreal scene walking into the event on a snowy morning with very summery tornado damage as a backdrop.

The population of Wooster is about 25,000 and it, in my mind, is a "gateway town."  Because once you are to Wooster you feel like you've arrived in the more urban, industrial areas of NE Ohio.  Go south of Wooster and you head deep into Ohio's rural Amish country.   Wooster (pronounced Wuhster) is a neat little town if you ever have a chance to go.

Okay, from neat little towns to neat little pies.....Dee (man, my family's Thanksgiving spread was awesome, but it didn't include this pie, if Wooster were closer to me, Dee would have had an unexpected supper guest!) made Vanilla Crumb Pie part of her menu on Thanksgiving Day.  This pie is one of my absolute favorites and Dee's version of it turned out gorgeous.  So I know you're all stuffed still and so am I, but you might want to consider this pie as part of your Christmas gathering menu.  Thank you Dee for sharing these beautiful photos! 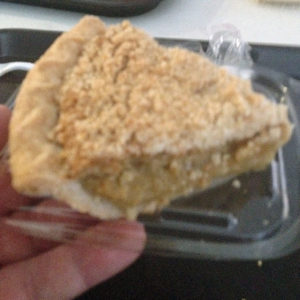 Tried this recipe?Let us know how it was!
« More Scenes From Wheat Ridge
Passing the Church Cookies... »