I have seen the T. Marzetti brand my whole life, just one of those brands that populate the grocery store shelves and I don't think much about it. But the brand, turns out, has a long history. And it seems to be mainly a Midwestern thing. Not sure if I walked into a Publix or a Hannafords or a King Sooper's if I'd see this brand. But the Marzetti brand is also the genesis of another popular midwestern food: Johnny Marzetti Hamburger Casserole

I mean, Johnny Marzetti Hamburger Casserole is really just a casserole of tomatoes, noodles, ground beef, and some other basic ingredients. But like any recipe that gets passed around, people tinker with it and the dish has become quite popular among the Amish with various versions found. This is particular recipe is called "Jon-Zetti" in an Amish cookbook that I found. And there is also a popular Amish version known as "Yum-A-Zetti."

Here is a fascinating history of the dish. An excerpt describes its early popularity:

Owners Teresa and Joseph Marzetti sought a simple main course, easy and cheap to make.
It had to be scalable to feed the masses, the starved college students from Ohio State University just down the street.  One of the dishes that Marzetti offered her customers became known as Johnny Marzetti, which was named after Teresa Marzetti's brother-in-law.A baked casserole, the dish included ground beef, cheese, tomato sauce, and noodles. It was a sensation at 45 cents.

It's interesting because this "Amish version" actually hews much closer to the original Johnny Marzetti recipe than some fancier versions that have taken root that pack it with spices. The original was pretty much classic comfort food, like this.

Cooked ground beef and onion form the hearty base of this dish. Many Amish Cooks that make this dish use a cast-iron skillet for browning the burger. But you can use stainless steel or non-stick.

Noodles are also an important part of this dish, some recipes call for elbow macaroni, but whatever noodles you like! And, yes, always add salt and olive oil to the water. I always do!

You can use any cheese, we used Provolone slices, but layer with shreddar Cheddar, slices of colby, whatever YOUR favorite cheese is!

Just keep laying stuff on top and alternate layers, this is noodles on top of the cheese layer.

Makes for a super hearty meal when paired with applesauce or may some fresh asparagus on the side! 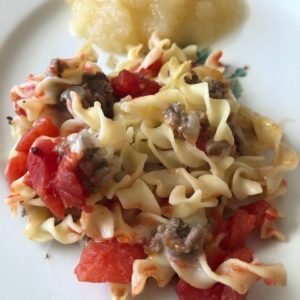