This article is a part of "The Amish Cook Column", a weekly series of featuring a story & recipe from Gloria Yoder, Amish widow & mother of six from Flat Rock, Illinois

Remember how Daniel enjoyed occasionally writing columns for me and how he couldn’t stay away from the subject of relationships? I wonder if God put it there, knowing that at the prime age of 33, he’d be called to leave earth’s ranks.

There’s one actual incident in Daniel’s life that got me thinking. Daniel spoke to a brother in church a few months before the unplanned event of being pinched between a tree and a backhoe, causing internal bleeding and death that very day. Daniel had known this man for years; now, in conversation, he realized that not all was clear between them, so he asked his friend, “When can we talk?”

A date and time were set.

To him, there was no reason to put off discussing anything that hinders relationships.
Later, Daniel shared with me their following conversation, and he is eager to talk with this brother again in the near future. This brother shared with Daniel what had been on his heart, including aspects of how Daniel unintentionally came across negatively. Daniel was so thankful to now know about it and have the opportunity to make restitution.

Then Daniel was called home. Yes, death, as we know it, brings finality beyond mere human words. A cluster of us were mourning over Daniel’s body, including this brother with tears streaming down his face. In simple sincerity, he stated, “He was a friend.”
I sobbed with sadness, mingled with joy too rich for words.
Now I wonder, “Is there anything I can clear with anyone? Should I, too, be called home tonight?”

I know it’s so much easier not to face those awkward situations, but there’s nothing like the pure joy of being clear before God and others!
Aren’t children the best example of this? This morning I blinked in wonder over little Joshua. At two years old, he prefers not to have others meddling too much with his toys. This adorable curly top was actively protecting his toys, and things were escalating by the second. When I intervened and helped him to brokenness, his expression was priceless. The scowl on his face replaced a tender smile as he wrapped his arms around his older brother and told him he was sorry. I notice that every time I allow little negative attitudes in the children to come out without me addressing them, in no time, it has multiplied to an overwhelming degree.
I contemplated it all. It would’ve been so much easier for me not to spend the time needed to get him there, but what a reward! Now, do I spend time with my Father in heaven? Enough time to get me to where I can rest deeply enough in his love, enabling me to have the courage to go to the one with whom I feel missing beats in the flow of the relationship and ask, “Is there anything I have done to hurt you, or things I could do differently?”
Okay, now there is no recipe for strong-flowing relationships, but food can make a difference! I‘m still planning to take a pie to someone Daniel had run into a year ago, who had unreasonably ranted over him. Daniel had decided to take him a pie to show love, and now that he’s not here to do it anymore, we want to follow through with that.
As you can hear, Daniel could not always restore perfection to every relationship, but with God’s love, he did what he could. Some people are simply less than reasonable, yet if we pause only for a moment and reflect on the possibility of what may be causing their thoughtless or grinding ways of relating, this small act of acknowledging their personal pain has a way of simplifying things a lot.

Be encouraged; some things take time and patience beyond reason.
If you have an urge to reach out to a hurting heart, warm them with this creamy Parmesan chicken bake!

This is a great way to prepare chicken breasts, with a simple sauce and few ingredients, this makes for an easy dish! Creamy chicken recipes are always popular in Amish kitchens (heavy cream is always close at hand for a quick cream sauce!)

You could add some potatoes to it, or serve the chicken on top of pasta, if you wanted to add more heft. Rice would also pair well with this as would fresh asparagus, spinach, or sun-dried tomatoes. Leftovers of this chicken are super because the flavor melds overnight and tastes better the following day after you reheat. You could use greek yogurt in place of mayo if you wanted to cut calories a bit.

Use boneless skinless chicken breasts when starting the Creamy Parmesan chicken bake. Use olive oil or butter to grease the pan. You can use chicken thighs if you do not have breasts. You could also use a deeper casserole dish instead of a baking dish.

Stir sour cream, seasonings, and mayonnaise to make a creamy parmesan sauce. Add some garlic powder if you want to make this into a creamy garlic parmesan chicken. You could also add some onion powder.

Bake until golden and done. Creamy Parmesan Chicken Bake is full of flavor! 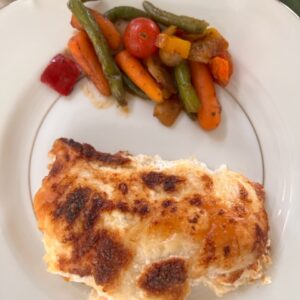 Tried this recipe?Let us know how it was!
« Millie's Amish Carrot Cake
Amish Sawdust Pie »