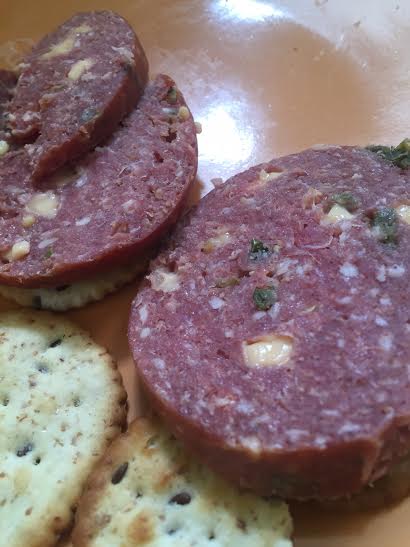 Rosanna Baman, our Just Plain Rosanna columnist, is super busy over the next three weeks as she prepares for the Brethren Annual meeting to be held in her hometown in mid-May.  It's a huge undertaking and Rosanna is doing her part by hosting 150 guests on their farm.  Yep, you read that right: 150 people will bunk down on the Bauman farm.  Holy cow, we'd be all stressed out if we were hosting 2 - 3 people, I can't imagine 150.

So the plan with Rosanna over the next few weeks is that we won't hear from her a ton. But next week she will write a column about preparing for meeting and 150 boarders, so that should be interesting, and then she'll have plenty to write about after Annual Meeting.

Meanwhile, this is some spicy, delicious summer sausage of Rosanna's. This sausage has some bite with jalapeno and cheese and fresh beef.