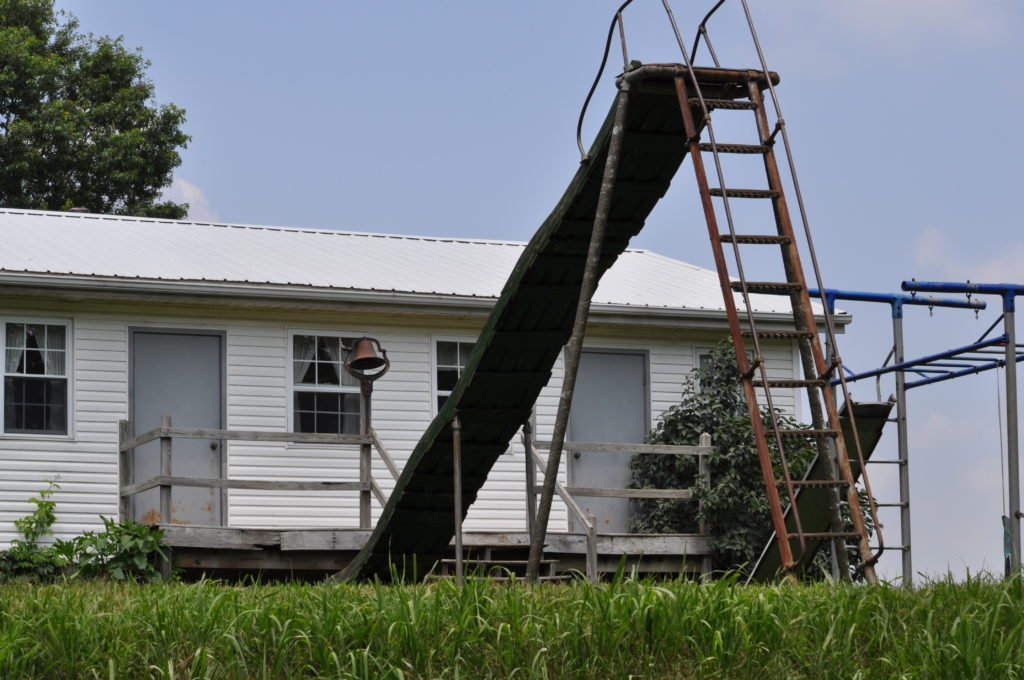 Editor's Note: Gloria is on vacation this week, her Mom, Dorcas Raber, fills in with a delightful account about the end of the school year!

The last day of school had finally come. In our community, that's the time for the whole church to gather together at the schoolhouse for a program, carry-in lunch, and ballgames, all of which are end of the year traditions at the Flat Rock Amish School (click here to see some more photos from the school).

It was a bittersweet day for my husband, David and I. David had taught school for the past two terms and now this was the very last day. He won't be teaching again next term. He had gotten attached his pupils. The children have their own special way of finding their way into our hearts.

The day began cool and rainy. Nevertheless, everyone gathered together at 9:30 AM for the annual end-of-school year program. The church benches had been set up in the largest classroom to accommodate all the family and friends in attendance. As the congregation started singing "Faithful Love,”  the teachers and the scholars filed into the front of the room. I shed a few tears to seeing them. They are so precious and everyone looked so nice all dressed up. Most of them wore pastel colors, which fits well into spring time. Several girls had brand-new dresses, including our 18-year-old daughter Mary Grace.( she had helped teach).

One of Mary Grace’s pupils gave her dress material that was a soft grape color the day before as a gift. She decided to make herself a dress that very evening, so she could wear it to Program Day.

The program began with the singing of “Faith, Hope, and Love”. The pupils sang nine songs and sprinkled throughout the program, were stories or Bible verses.

Several memory makers were when the youngest pupils sang a song by themselves, "God's love is like a Circle”  and when the four oldest girl sang, "You can fly on mended wings.” Lovely. Even though we get wounded in life, we can fly again because of God's grace

After the program, it was time to put food on two long tables so that everyone could file through and fill their plates. What a delicious variety! Grilled chicken, mashed potatoes and gravy, corn, green beans, taco salads, and a variety of desserts were served. Grilled chicken is a specialty in our community and is served at most of the weddings and other special events.

Micah Zehr  was the only graduate this year, and his parents offered to grill chicken. They had soaked the chicken the evening before in a brine, then grilled  it to perfection the next morning. As we ate, it was raining and the prospects of playing the annual softball game looked quite dim.  But then it actually stopped raining and the ball games were on their way. In spite of the cool weather, and some light rain now and then, they kept on playing. A number of us mothers watched the game from  inside the school house where it was nice and warm. A whole row of windows face the ball diamond. One couple parked their buggy up close to the ball diamond and watch the game from inside the buggy.

First of all was the softball game of competition between the older school children and their teachers against the dads. You can almost feel the excitement in the air. I really really wanted pupils to win the game, but this year the dad's got the upper hand and won . Oh well, I decided, children must learn to be good losers too.

The next game was a sight to behold. The younger pupils and the teachers played against the dads. Of course everyone knew that the sides wouldn't be fair at all so the dads had to have one hand in their pocket and leave it there and only use one hand, including catching the ball.. There were some humorous moments, especially when one dad saw a flyball come he flipped off his hat with his free hand and caught the ball with his hat. The game ended perfectly. It was a tied score.

Games were played all afternoon. In mid-afternoon several tables were filled with finger foods. Somehow everyone seemed hungry again by that time. There were salty snacks, several dips, finger Jell-O cookies etc.served.

David and I were given a lovely "outside "table by the church. We have it on our back deck where it will be used often. The top is lined with blocks giving it a grand look.  And so another school term has ended and we feel grateful to God for a good term with many precious memories.

My neighbor lady Erma Eash had made these bars for "program day."  Rich and good.  Try these homemade O'Henry bars.

The recipe below is for O'Henry Bars, looking for some other good Amish candy recipes?   Try these homemade Twix bars.  Or check out Amish Mashed Potato Candy.