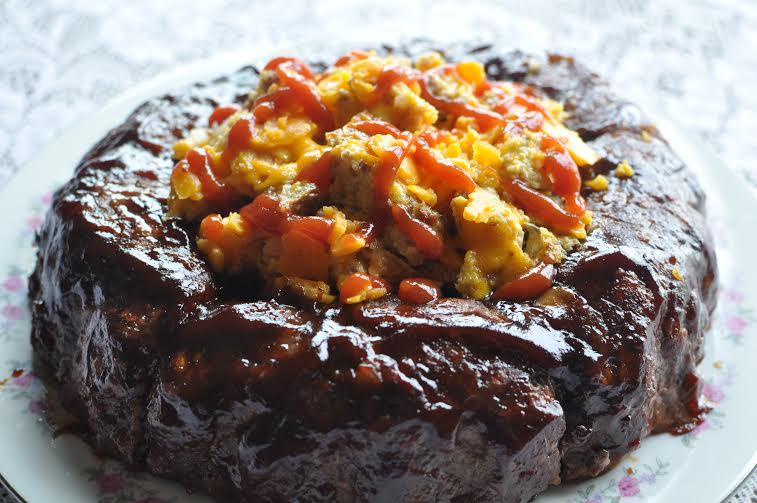 Several weeks ago my husband promised our daughter Julia, age 4, that he’ll take her along bow hunting sometime.  She was all excited as I got her ready to go. It was a beautiful fall day, perfect for her to go with Daddy.

Deer hunting   is a necessity here.  Deer is our main meat supply in this community. Each year we are blessed with a bountiful supply of venison. Deer hunting varies from one Amish community to the next. I’m guessing at least several deer hunters could be found in most Amish settlements.  In our area we have an exceptional amount of deer, so we rely on venison as our main source of meat.  Most of the men, boys, as well as some girls do quite a bit of hunting.

When Julia accompanied Daniel on the hunt he  located a spot on a friend’s property beside a pond where they stood side by side.  The trees and underbrush around them served as excellent cover for any deer that might chance to pass by.

It wasn’t very long before Julia was informing Daniel that she’s ready to go home.  Her boredom promptly ended when they spotted several deer. Unfortunately none of them came close enough for Daniel to get a shot at them. Even though they did not get a deer it gave them a chance to spend some quality time together.

When Daniel returns home from hunting the children and I enjoy greeting him at the door to see whether or not he has had a successful hunt. In spite of him going multiple times this year he hasn’t been as successful as he has been in recent years. Last week one morning he sat on his deer stand waiting on the deer that just wouldn’t come.  He then came to the realization how hard he had tried to do all the right things for a chance to bag his deer. So he simply told God, “It’s up to you Lord. If you want me to shoot a deer, you are going to have to bring them to me.” He had prayed about it many times before but this time committed to God in a new way. After returning home that forenoon he told me about his inspiration of just trusting God.

That evening when Daniel returned to the woods once more Julia and I had a special time of prayer for him. We asked God to bless him with a deer if it is not against His will.

When Daniel didn’t return home as early as he generally does I started wondering if perhaps he had been successful.  Finally the headlights of our tractor shone into the driveway.

“It’s Daddy!” I told the children and excitement reigned.

We’re always glad to have Daddy home and were eager to see if God perhaps blessed him with a deer.

Opening the door we quizzed him “Did you get anything?”

“Come and see,” he responded with a smile.

We followed Daniel to the trailer which was hitched to the tractor.

My eyes widened. I felt like I was seeing things.  Yes, God had certainly answered our prayers: Daniel had come home with a 9 point buck!

We cheered for Daniel. It was interesting to hear how he had bagged the buck just several minutes before dark which was about the same time Julia suggested we say a prayer again. I was amazed at Daniel’s strength, hearing about how he dragged the whopper of a buck to the tractor by himself. Later, when he weighed the deer after it had been field dressed, it weighed in at 205 pounds.  No wonder he had to work so hard to get it loaded and was hungry as a bear when we sat down to eat supper together.

On opening morning of shotgun season I plan to take my turn to head into the woods with Daniel.  No, I won’t’ be shooting but we have a family tradition of the wives joining their husbands out in the woods on the first day of shotgun season.

Apple venison rings are an old faithful favorite of ours. I like using a blend of sausage and venison.  It is a tasty and attractive dish! You can scramble some eggs and fill up the center with them.