If you would have told me back in 1990 that I’d be running an Amish cooking website, I’d likely called you crazy.  Well, first of all, there was no such thing as a website then.  And, well, the Amish were only just beginning to be on my radar in that year.  But one of the people who paved the way for all the work I’ve done over the years is someone whom I only had a passing awareness of at the time.  The Amish Cook column has been a bit of a trailblazer over the years bringing Plain recipes to the masses.  But there was someone before The Amish Cook who was dishes out Plain culinary wisdom while I was still in high school.

Long before I became interested in Amish culture, I’d occasionally see a series on PBS called “Cooking from Quilt Country.”  I was mildly intrigued, but I don’t think I ever watched an episode.  It wasn't until a couple of years after launching the Amish Cook column that Marcia Adams appeared on my radar, and the Amish Cook on hers (she ordered one of our cookbooks and was graciously complimentary of it). 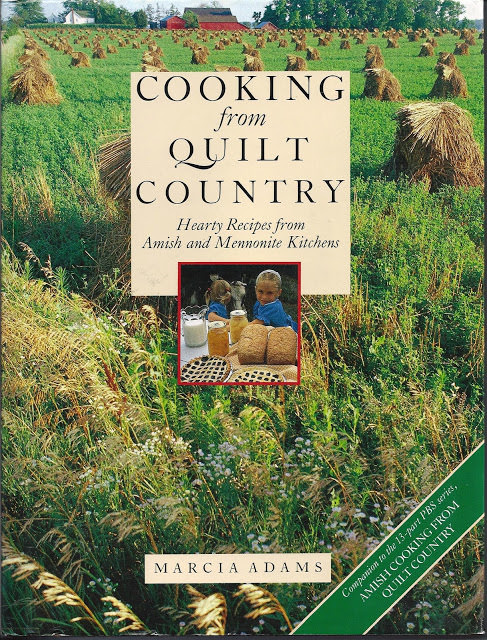 This cookbook is a mainstay to this day in many midwestern kitchens...

For nostalgic fans of Marcia, you can order her best selling book from Amazon here.

Marcia Adams sort of was best known for her Amish-influenced cooking, but she really was sort of a "Midwestern Martha Stewart" who could cook in all sorts of spheres.   She was dogged with health problems that eventually forced her to end her show and ultimately caused her demise five years ago.  Here is an article that talks more about Marcia Adams.

You can check out Marcia Adams's blog from six years ago, it's entries are still up and available to read here.