We are down to the last days of Mary's stay. How we will all miss her once she's gone back home to Ohio! After two months of having Mary here, we can't imagine life without her. We didn't realize that Rayni took us seriously when we talked about how we'll have to adopt Mary until we overheard her talking with Grandpa (Mary's dad) on the phone. My ears perked when I heard her explain to Grandpa, "We are going to adopt Mary."

The children will all miss Mary. They love listening to Mary's endless stories of when she was a little girl, though Mary recently told them that she is running low on stories, yet somehow she always comes up with one more. Then there are the children's highlights of taking their turn sleeping with Mary. They love the foot rubs she gives them with her special foot lotion. Julia enjoys the times the two of them page through cooking magazines, looking for new ideas.
Last night when I whispered in Elijah's ear that it's his turn to sleep with Mary, he jumped up and down and ran in a circle giggling with delight. Seeing Mary's ability to make a difference in our young children's lives while she's here makes me wonder how I can also positively affect other children that cross my path.
Now you really should have been here to take a peek at Mary's endeavors on Monday afternoon and evening on supplying us with a vast quantity of canned soup. Daniel pitched in and helped after work, and I did what I could between caring for the children. Time and again that evening, I'd tell Joshua, "You are more important than soup!" Yes, little ones are more important, and it's okay if everything takes more than double the time when caring for them while trying to get some work done.
I hear Joshua, he's waking up the way it sounds, so I'd better be running along. It's a good thing you don't get interrupted reading my letters as often as I do writing them or you'd all be completely bored, for sure!
Now back to our soup again, I have always had a crush on large iron kettles and believe it or not, I had a letter from a column reader, Robin, from Missouri who wrote, offering a large iron kettle to us as a family. I was elated by this act of kindness. Amazingly, my sister and her friends were making a trip West a short time later and stopped in at her house and picked it up for us. We were all eager to try it out for the first time, now this week it finally came to reality.
Daniel got a fire started behind the house while Julia and Austin helped carry out carrots, potatoes, and onions, which Mary had chopped, ready to be dumped into the soup. Soon we had all the soup fixin's set up on a card table next to the crackling fire; ya, we had a 'cozy' fire even on this muggy day with a temp of 90 degrees. The children took advantage of the heat by playing on their slip ‘n slide close to where we were working. 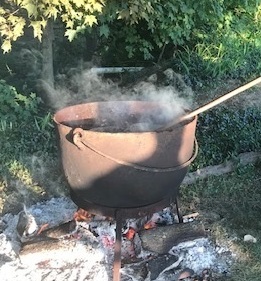 An open kettle at the Yoder's 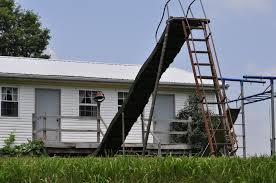 The Amish school in Flat Rock where classes are starting up again.

At the top of the list was making a large batch chicken broth with portions of chickens that were raised on an Amish farm a few miles from here. We were pleased with the 30 quarts broth it yielded. While Mary strained the bones from the rich broth, Daniel and I used tomatoes from our garden and got started on a large chili soup batch.

DANIEL FIRES UP THE KETTLE

Daniel used a large wooden spoon and stirred while I dumped in the thickener, spices, and the likes with one hand and juggled Baby Dear with the other. Though I often have an outline of a recipe to follow, we always end up using our taste buds as the final judge. The blazing fire had the chili soup done in short order. Together we ladled it into 28 one-quart jars, put lids on, then placed them into large canners that fit over two burners and holds up to 15 one-quart jars.
Next came the vegetable stew. We used half of the broth as a base then we dumped in deer sausage, veggies, thickener, and seasonings. After a while, we were once more filling jars. This time we were blessed with 50 quarts. Oh my, imagine all those simple meals this fall and winter to feed our little ones once Mary has gone back home, and I won't have her help anymore! I am so thankful knowing that God really knows just how much we can handle and what we need; He demonstrated that once more by sending Mary when we needed her the most.
This week I'm excited to share one of Mary's specialties with you all: bacon-stuffed mushrooms!