I've written a lot lately about how pumpkin is a late-season mainstay in Amish kitchens.  Homegrown pumpkin pulp finds its way into all sorts of sweet and savory autumn recipes, capped off by that Thanksgiving must:  pumpkin pie.  And who doesn't like pumpkin pie?  Still, a heavy ol' piece of pumpkin pie isn't always appealing when you're already grazing through a gathering.  That is where a dish like this "pumpkin pie dip" is so appealing.

You get the flavor punch of pumpkin pie without the heavy crust. You can dip an animal cracker, apple slice, or ginger snap into this fluffy dip and get a taste of pumpkin pie without eating a whole slice. The original recipe called for pumpkin pie spice, but we replaced it with a blend of nutmeg and cinnamon.  Some people call this recipe "pumpkin cream cheese dip" because it has the wonderful flavors of both.

November is usually pumpkin's swan song both in Amish and non-Amish homes. By the time the last pieces of pumpkin pie are consumed on Thanksgiving, that's usually hit for another year. Occasionally, you'll see pumpkin pie served for Christmas, but by the end of November, people have had their fill of pumpkin breads, rolls, cookies, pie, and dip.

The original recipe doesn't call for it, but I think a teaspoon vanilla extract would be a nice addition.  There is no baking with this recipe, no eggs or yolks to deal with, no flour, no dough, so you just get a nice fluffy dessert.  Yes, it has a few calories,an about zero protein, but well worth it!  You'll want to make this recipe and share it on Facebook and Instagram for sure!

Pumpkin is a versatile Amish favorite this time of year, found in all sorts of dishes!

A classic, crunch, that is so good!

A nice twist on an old favorite!

Delicious! This is a cake you can pretty much eat anytime between October and Christmas. Or, heck, who says you can't enjoy pumpkin in April or May?

For breakfast, supper, or anytime you want a pumpkin-infused meal! 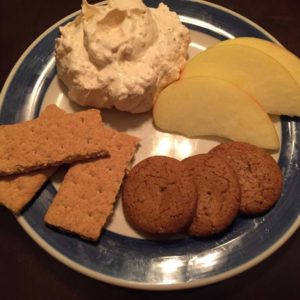