Butter tarts are quintessentially Canadian confection. And, the Canadian Amish, have taken a liking to them too. Really, what is there not to like? Buttery goodness and deliciousness.  The same applies to butter tart pie!

In fact, the first time I’d ever heard of a butter tart was actually when I was visiting an Amish home in Ontario.  The Amish tend to adopt local food customs, and in Canada that includes the famous butter tart, anything maple, and poutine, french fries smothered in gravy and whatever else one can grab.

By the way, the Canadian population of Amish is growing. The largest Amish settlements are in the province of Ontario, near Kitchener, Aylmer, and Milverton. The province of Prince Edward Island has experienced a boom of Old Order Mennonites and Amish moving in. I’ve only been to the Amish community at Aylmer and another smaller one near Lindsay. And my understanding is that they’re Amish that moved into Manitoba. Quebec does not have an Amish population because of strict regulation of parochial schools, which the Amish like to run themselves.

Below are a photo of Canadian Butter Tarts, these were made by an Amish woman in Aylmer.


Butter tarts are great, but they are a little bit labor-intensive. You have these tiny pie crusts and you fill each one individually and while I highly recommend them, they do require some steps. But this butter tart pie is something I could really get behind, because there are fewer steps just one crust to deal with. Thank you, reader Penny, who appropriately lives in Canada, for sharing this recipe with us. And her photo.

SIGH, the pie recipe calls for over 2 cups of raisins. I have such a love-hate relationship with raisins. I'd be tempted to forego them. The Amish Canadian butter tart recipe I have says you can sub walnuts or coconut for raisins. I don't know, I say raisins are not my favorite - and they are not - but sometimes they work well in a recipe like this, I will grudgingly admit. So, the raisins are up to you.

As for the pie crust you could use a pre-made one...this Amish in-the-pan no-roll crust is now my go-to it literally takes just minutes. So I'd use this. 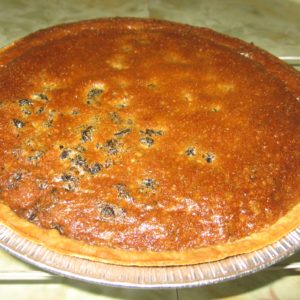 Keyword Butter
Tried this recipe?Let us know how it was!
« The Amish Cook: Mom's Homemade Breadsticks
Amish Cake For Company »