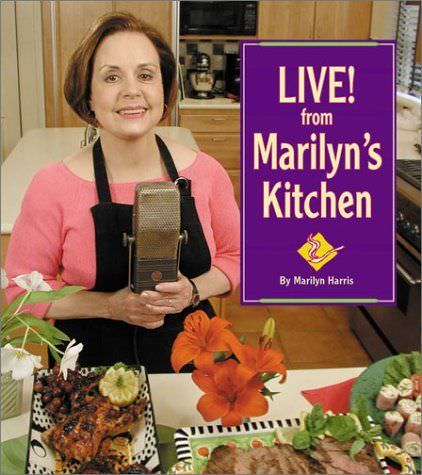 Today's post about the late Marcia Adams got me thinking about another food personality, a woman named Marilyn Harris.  She is primarily a Cincinnati celebrity, but she has appeared on CNN, authored some cookbooks, etc.  She's been around a long time and there was a time that if you were a cookbook author and wanted to promote your book in Cincinnati, you sought out Marilyn's show.  I don't think Marilyn was a big Amish Cook fan and that was understandable.  Her recipes are elegant and classy, whereas the Amish Cook's recipes  - at least at the time - consisted of cream of mushroom soup and saltines (I do think Gloria's style of cooking would meet Marilyn's approval more)

After years of trying, I finally secured a coveted guest spot on Marilyn's show so we could promote one of our Amish cookbooks. Her show used to air 5 days a week and on the appointed day I was to be interviewed by her she was doing a remote broadcast.  Mind you, this was the mid-90s when communications technology still had some growing to do.  She would be broadcasting from the foyer of a department store  (Cincinnatians may remember the old Swallens stores).  I arrived at Swallens and was excited to see Marilyn and her crew broadcasting.  She was gracious, despite her probable disinterest in the Amish Cook. Hey, she was having me on her show, that was all that counted.   Very quickly, though, a problem became evident.

Marilyn put her hands on her headphones and winced.  And so did I. So did everyone.

Her remote broadcast booth was by a set of automatic doors and everytime a customer entered the store triggering the doors, a loud staticky feedback would SQUEEEEEE through the air, totally drowning out anything Marilyn and I were talking about.  She would ask me a question, but I'd see a customer approaching the door and then try to rush my answer before a big SQUEEEEEEEE cut it off.  Marilyn looked annoyed and summoned a producer to try to fix the problem which they finally did fix, just as the show was ending.

So, maybe 30 percent of what we discussed that day was actually audible on the air.

Oh well, some 20 years after that on-air disaster, Marilyn is still at it (and so am I).  Perhaps we'll meet again someday.  You can check out her webpage which is choc full of great recipes and info as to how to catch her weekly radio show.  Below is her recipe for a basic custard pie.  That brought back memories, my grandmother used to make custard pie....I probably have't had any in 30 years...